A robin escapes at ground level. In the hollow of a slope, between the branches, on a thick carpet of oak leaves, the camouflage tarp blends into the forest environment. Concealed from head to toe, in a combination of green, brown and black, its occupant is buried, invisible.

For forty-eight hours, under a continuous rain, Staff Sergeant Alexis, member of the 13th Parachute Dragoon Regiment (13e RDP), has been watching and listening, without moving, to movements and noises.

He only slept for half an hour. He could stay for ten days if the mission required it, with the necessary water, rations and ammunition.

Equipped with night vision binoculars, a radio, a computer capable of withstanding the rain of the Creuse as well as the dust of the desert, armed with a semi-automatic pistol and a machine gun, he learned to be stealthy. "We have an unusual mission, as close as possible to the enemy.

Our goal is to set up a mobile surveillance system, with a cell that moves discreetly, to be able to take pictures," explains this paratrooper, who is experienced in high altitude drops. He has already been on seven operations, mainly in the Sahel.

That day, above the lake of Bort-les-Orgues (Corrèze), he infiltrated at night, for an intelligence operation on "the possible presence of a personality of interest", the leader of a terrorist cell.

In reality, the young non-commissioned officer was participating in the annual "Gorgons" exercise, bringing together special forces units of the French Army: the 1st Marine Infantry Parachute Regiment (1st RPIMa), heir to the SAS of the Free French Army, specialized in counter-terrorism and hostage rescue; the 13th RDP, expert in intelligence; and the 4th Special Forces Helicopter Regiment (4th RHFS), master of aerial warfare

They are accompanied by the Special Forces Command and Signal Company (CCT FS) and a support group composed of experts, image analysts, doctors, deminers, and nuclear, radiological, biological and chemical (NRBC) risk advisors, as well as a group of Belgian special forces and American "green berets.

"We try to mix as many action units as possible. This allows us to work together as allies," said Colonel Vincent, Chief of Staff of the Special Forces Land Command. 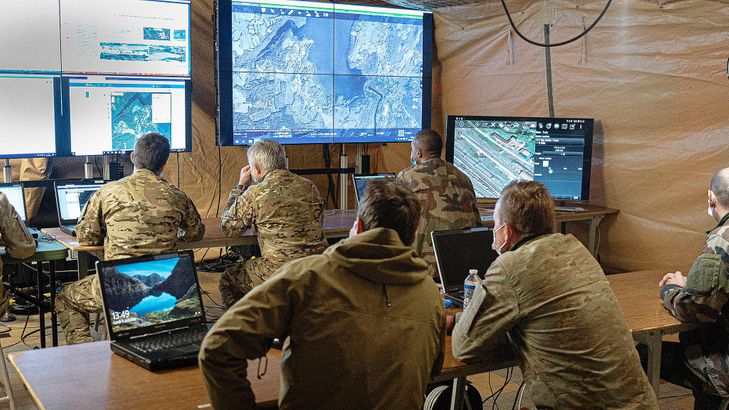 Within a radius of 120 to 150 kilometers around the camp at La Courtine (Creuse), this force of 400 soldiers trains in conditions similar to those in foreign theaters. The scenario is that of a "somewhat Ukrainian" conflict, explain the officers.

The scenario is that of a "somewhat Ukrainian" conflict, explain the officers, "of the Donbass or Crimea type", "with an enemy that has the same forces as us, if not more, and with 'little green men'", the nickname given by the Ukrainians to the infiltrated Russian soldiers.

"The theme is that of the hardening of commitments. The environment is more and more contested," said General Bruno Baratz, commander of the Special Forces Land.

The scenario fits the strategic vision of the Army Chief of Staff, General Thierry Burkhard, for whom it is necessary to "relearn the grammar of high-intensity warfare.

This means that the enemy could no longer be only asymmetrical, like the terrorist groups in Mali, but also symmetrical, like the conventional army of a power, capable of challenging French air superiority or carrying out actions in "immaterial fields" through cyber attacks or informational warfare.

The command post deployed for the "Gorgons" exercise is preparing for these new threats. "A big effort was put on the security and protection of information systems.

We played a hostage situation with a limitation of the PC's resources, which forced it to put more human resources on the ground," says Colonel Vincent. Under the HQ tent, several screens allow for instant and permanent monitoring of operations. Small blue dots geolocate the position of the search team during the surveillance phase.

In a neighboring tent, a dozen young analysts and geographers interpret the aerial shots. They are the ones who received the reports sent by satellite or UHF (ultra-high frequency) by Staff Sergeant Alexis of the 13th RDP. On their screens, the investigators look for clues and direct their sensors, radar or drone, to prospect further. "This is the reactor of the task force, a place where we work seven days a week, and twenty-four hours a day, to gather intelligence," says Major Mathieu.

A chain of operations

In the field, the special forces soldiers are carrying out a series of operations in different situations: hostage rescue on the rugby field in Brive (Corrèze); action in an urban environment in a disused school in Clermont-Ferrand (Puy-de-Dôme), with the capture of a captain; or mass hostage-taking, with CBRN contamination, on a train near Vichy (Allier).

They are preparing to intervene in all environments, hotels or shopping centers, including on French territory if the President of the Republic decides to do so.

With an average age of 33, these soldiers have received extensive training, testing their infiltration techniques, new tactical procedures and new equipment. We are discovering new operating methods," explains Captain Pierre, member of the 1st RPIMa.

The objective is to prepare for combat against a state army. As head of a group of about 100 commandos "with big characters", he describes the excellence of these elite troops: "Open-mindedness, adaptability, autonomy" "They are the only units capable of competing with the American special forces on a wide range of operations", he believes. 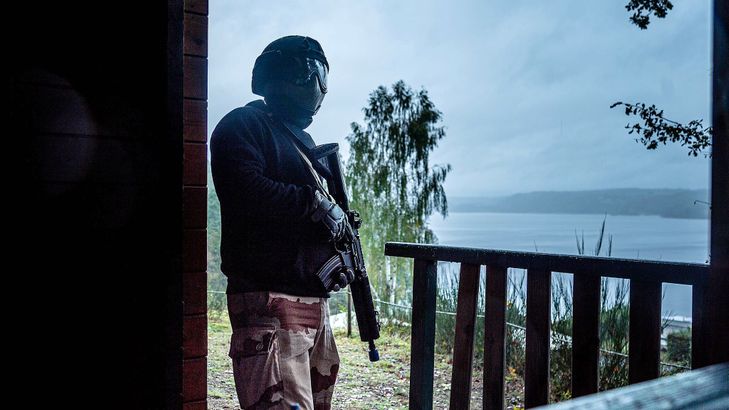 A chaplain in fatigues

Among these steely characters stands a singular and endearing figure. The "Padre" of the Special Forces Land, Father Etienne, also participates in the exercise, from the 7:30 a.m. mass to the sports and parachute jumping sessions. He is a sensor of the troop's morale.

"I'm a chaplain in fatigues and unarmed. Because I share their daily lives, they come to me for an enlightening, non-judgmental dialogue. I have a role as a confidant and advisor to the general command, as a messenger."

Outside, night falls and four groups of team members, French, Belgian and American, prepare their equipment. They are preparing to form an assault column. Their target is a terrorist cell hidden on the shores of the lake of Bort-les-Orgues, which possesses radiological and chemical material.

The precision shooters have rehearsed their gestures to the point of "mechanization". They will use training ammunition called "simunitions" to gain realism. This means that their weapon is not lethal but causes a strong impact. That evening, in the darkness, the objective of "neutralization" was achieved in thirty minutes.

A centralized command. Since 1992, after the Gulf War, the special forces have been gathered under the Special Operations Command (COS), which is placed under the orders of the Chief of Staff of the Armed Forces and the direct authority of the President of the Republic.

The three components of the army. There are 2,600 special forces soldiers in the army, 900 in the air force and 650 in the navy.

In addition to the three land regiments located in Bayonne, Pau and Souge, there are seven marine commando units - including the Hubert commando based in Saint-Mandrier, the others being in Lorient - and two air units, the number 10 air parachute commando and the 3/61 Poitou transport squadron,
on the Orléans-Bricy base.